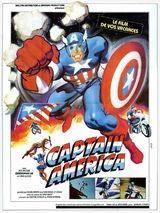 A government agent is looking for a missing scientist, believing that a revolutionary leader known as Miguel has him, and that he is using him to get his formula for something that can accelerate the aging process. He sends Steve Rogers aka Captain America to find him and rescue the scientist, his only lead is a chemical that the scientist needs for his formula. As he gets closer to the truth Miguel threatens to spray the chemical on a major city unless his demands are met. But the President does not negotiate with terrorists, can Captain America save the day!?