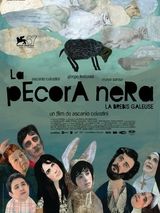 Nicola is a man who has spent much of his life in a mental institution, though not always as a patient. Nicola's mother suffered from mental illness, and when young Nicola grew old enough to understand some of her stranger behavior as well as the family's other dark secrets, a few of the adults around him preferred to suggest he was disturbed like his mother, and he was encouraged to visit an asylum not far from his home. As an adult, Nicola has spent enough time around people who have a tenuous connection with reality that he has a superficial resemblance to them, and has developed a strange set of imaginary friends to go along with his eccentric real-life companions and the woman he loves from afar, Marinella.