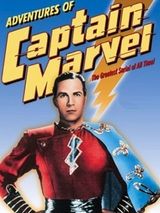 On a scientific expedition to Siam young Billy Batson is given the ability to change himself into the super-powered Captain Marvel by the wizard Shazam, who tells him his powers will last only as long as the Golden Scorpion idol is threatened. Finding the idol, the scientists realize it could be the most powerful weapon in the world and remove the lenses that energize it, distributing them among themselves so that no one would be able to use the idol by himself. Back in the US, Billy Batson, as Captain Marvel, wages a battle against an evil, hooded figure, the Scorpion, who hopes to accumulate all five lenses, thereby gaining control of the super-powerful weapon