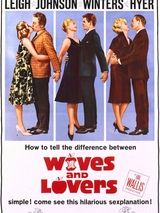 Husband and wife Bill (Van Johnson) and Bertie Austin (Janet Leigh) and their daughter live in a low-rent apartment. He's a struggling writer, at least until agent Lucinda Ford breaks the news that she's sold his book to a publisher, including the rights to turn it into a Broadway play. A new house in Connecticut is the first way to celebrate. But during the long hours Bill is away working on the play, Bertie befriends hard-drinking neighbor Fran Cabrell and her boyfriend Wylie, who plant seeds of suspicion in Bertie's mind that Bill and his beautiful agent might be more than just business partners. Bertie jealously retaliates by flirting with Gar Aldrich, an actor who will be in her husband's play. Bill goes to Connecticut for a heart-to-heart talk, finds Gar there and punches him.