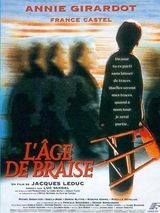 Jacques Leduc directed and co-scripted (with Jacques Marcotte) this Canadian-French co-production, a drama about an aging Montreal woman, Caroline (Annie Girardot), in her 60s and contemplating impending death. She destroys old correspondence, cleans her apartment by putting furniture in the street, and looks back on her life (as revealed via flashbacks and a film crew interviewing her daughters). Caroline's brief marriage to an Englishman gave her one daughter, successful businesswoman Rachel (Domini Blythe), and an affair with a rebel in the Congo resulted in her other daughter Myriam (Sheila Rose). Further memories rise to the surface when Caroline joins her long-time friend Maureen (France Castel) for a black-tie reception where their community work in Africa brings them an Order of Canada award.