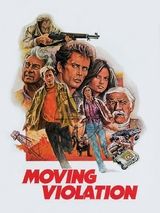 Eddie Moore is a young drifter passing through the small town of Rockfield when suddenly he gets harassed by corrupt sheriff Leroy Rankin and his Deputy, Tylor. Later he meets up with waitress Camille "Cam" Johnson and both skinny dip in a swimming pool owned by H.L. Rockfield, the richest man in the area. Later Tylor shows up at his mansion and starts criticizing his business practices, something that he doesn't know is Sheriff Rankin is also there and hears every word he said, he then shoots Tylor and staggers away and manages to seek refuge in the back of Cam's van. Felling his reputation as Sheriff will be tarnished if anyone finds out about it. He blames Eddie and Cam for the killing and puts out an APB. Endess car chases and shootouts ensue as they try to stay alive.