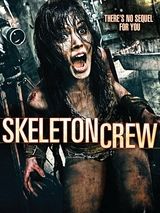 Back in the early 1970s, at a mental institution near the Russian border, a crazed doctor, Dr. Anderson assumed the persona of "the Auteur," and began murdering his patients while filming the atrocities. Thirty years later, an American film crew has arrived at the hospital to shoot a horror film based on those awful events. The director, Steven, is determined to make the film as realistic as possible, a goal that doesn't seem too far-fetched when his Finnish sound men discover a hidden room in the hospital basement. There, perfectly preserved, are the original snuff films shot by "the Auteur". As Steven's obsession grows, his cast and crew begin to fear for his sanity. But this is only the beginning, because when Steven discovers actual camera used by "the Auteur", he assumes the role of the murderous doctor and the real slaughter begins.