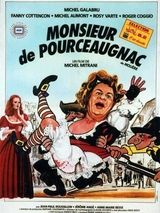 Mixing real locations with a Louis XIV stage setting, director Michel Mitrani interprets the story first told in Moliere's play of the same name, written for the stage. A slightly supercilious country gentleman, Monsieur de Pourceaugnac (Michel Galabru) has arrived in Paris to marry Julie (Fanny Cottencon) the woman promised him, but he does not know that Julie is in love with a handsome young man and has no interest in marrying the grand Monsieur, at all. She and her lover ask the cunningly clever Sbrigani (Roger Coggio) for help, and he concocts a wild array of characters with claims on the easily gulled Pourceaugnac's attention, including arrogant doctors and women with supposed liens on his matrimonial intentions -- actually no more valid than the ostensible creditors out to collect imaginary debts from the unwary gentlemen. The dialogue and situations are as funny as when Moliere first wrote them, but Mitrani's version may be a bit long and slow for some tastes. 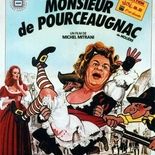 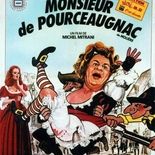