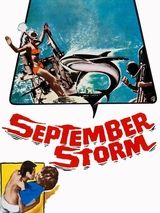 September Storm is a 1960 American adventure film directed by Byron Haskin. American fashion model Anne Traymore, swimming off the isle of Majorca, loses a bracelet, which the handsome Manuel del Rio Montoya returns to her. She believes he owns a beautiful yacht called The Swan, but he merely works on it for the wealthy Rene LeClerc.