Guy's father was a hero during the French Resistance era but he never talks about it, or so little. When he dies,Guy, his brother and his sister have him incinerated, following a wish their dad had expressed when he was still alive. But Guy soon starts feeling uncomfortable about this move. Haven't they, by cremating the body of their father, make a hero disappear from man's memory? Haven't they used the same method as the Nazis to get rid of the remains of a hated enemy? 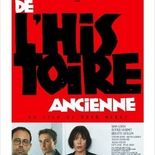