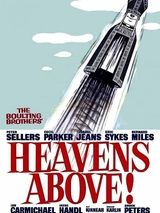 A naive but caring prison chaplain, who happens to have the same last name as an upper class cleric, is by mistake appointed as vicar to a small and prosperous country town. His belief in charity and forgiveness sets him at odds with the conservative and narrow-minded locals, and he soon creates social ructions by appointing a black dustman as his churchwarden, taking in a gypsy family, and persuading the local landowner to provide free food for the church to distribute free to the people of the town. When the congregation leaders realise the mistake and call for the Church of England to remove him, this turns out to be a very, very difficult issue - until one clergyman realises that a British project to send a man into space is in need of an astronaut...