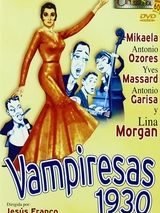 As the era of silent films finds itself at a close, four down-and-out silent film actors and musicians struggle to find work. Fate leads them to a former star of the silent era as she struggles to escape her reputation as a wild and evil vamp of the silver screen and longs to be just thought of as an honest and decent woman. They join forces, and for a short time have a decent amount of success singing and dancing at clubs and bars. But the public has an insatiable taste for foreign black jazz bands, and they will stop at nothing to become a success.