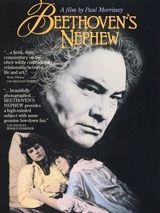 The plot centers around old Beethoven's fixation on the welfare of his nephew, for whom he fought a lengthy custody battle against his brother's former wife. Beethoven thought she was a bad influence on the boy. Sadly, the nephew isn't receptive to Beethoven's "overtures", and resents his boorish uncle's efforts on his behalf. The nephew is a complete nonentity, lacking in both interest and talent. He seems to wish only to be left alone.