One Night in Turin

Synopsis One Night in Turin

Before the Premier League and multi-million pound salaries, in England 'football' was a dirty word. The game was in disgrace, the fans, hooligans, the nation, it seemed, were all played out. Then there was Italia '90 - The World Cup - a shot at redemption. But this was no ordinary World Cup and no ordinary time. The manager, Sir Bobby Robson, was under intense media scrutiny, and his team described as 'donkeys'. Yet over six short weeks, through their heroic exploits they united a nation, coming within a heart beat of reaching the World Cup Final. Narrated by Gary Oldman, featuring match action - from Platt's last-gasp winner against Belgium to the silky skills of Gazza and the cool finishing of Linekar - and previously unseen footage, this is the definitive story of England's greatest footballing adventure on foreign soil....so far.

dernières bandes-annonces One Night in Turin

One night in Turin - Trailer (VO)

dernières photos One Night in Turin 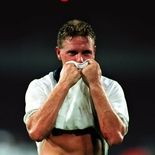