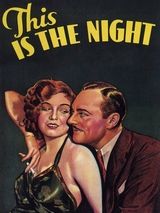 When Claire Mathewson's (Thelma Todd) husband Stephen (Cary Grant) comes back unexpectedly from the 1932 Summer Olympics, where he was supposed to compete in the javelin throw, he discovers the train tickets for a romantic Venice getaway she has planned with her lover Gerald (Roland Young). Gerald's friend Bunny (Charles Ruggles) lies and says that the tickets are actually for Gerald and his wife. With Stephen still suspicious, Gerald must find a fake wife to go to Venice with him. He tries to hire the actress Chou-Chou (Claire Dodd), but since her boyfriend is a jealous man, she gives the job to out-of-work Germaine (Lili Damita), who needs the 2000 franc fee to keep from starving. At first, Gerald thinks she is too demure, but she soon convinces him that she can pretend to be a glamorous wife.