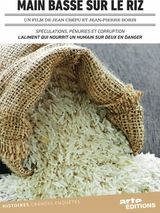 No economic activity feeds as many people and is as crucial to the social harmony of numerous countries as rice cultivation. It feeds nearly half the population of the planet and conditions our global food security. This cereal grain, which occupies 15% of the world's cultivable land, has the power to ensure the political stability or bring down governments. In the spring of 2008, the price of rice rose six fold in six months. Unprecedented. The poor suffer the most from these skyrocketing prices. Demonstrations broke out in 40 countries. There was talk of food riots. Referring to the explosion of prices in 2008, this documentary deals with the challenge of global food by questioning those who manage the world's rice system.