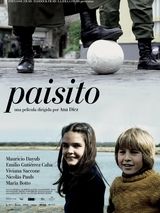 Two young people learn about love as politics turn their world upside down in this drama from director Ana Diez. After a long and successful career as a soccer player, Xavi retires from the game and moves to Spain, where one day to his surprise he happens upon Rosana, a friend from his childhood in Uruguay. As Xavi and Rosana catch up on what has happened to them over the past thirty years, they flash back to 1973, when young Xavi and his father Manuel, a shoemaker, lived down the street from Rosana.