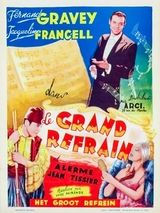 A ten-year old film when it was first released in the USA as "Symphonie D'Amour" in 1946. Panard (Fernand Gravet) is a talented composer who is having little success in his musical career. He is reduced to hiring out as a sandwich-board man to advertise what proves to be his own show. His girl, Jacqueline Francell, interests a Marquis in backing the show. She and Panard are happily reunited after the successful opening of his operetta.