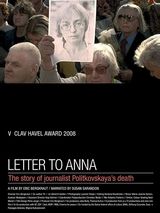 'Sometimes people ask me how I can still be alive. It is a miracle', Anna Politskovkaya says to filmmaker Eric Bergkraut. For Letter to Anna he has used images from a film he had planned to make; a film about the human rights journalist who put her life on the line through her critical writings of the Russian government. The material that Bergkraut collected has been used in this film to reconstruct the events which led to the murder of Politskovkaya. As well as a reconstruction, the film is a portrait of a tireless fighter for justice, and a sketch of corrupt and merciless Russian politics. Interviews with Politskovkaya are intertwined with archival footage and conversations with family members, colleagues and other political activists.