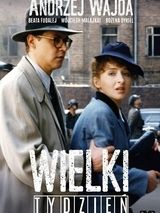 During the Nazi era, a Jewish woman on the run takes a trolley which passes near the Warsaw ghetto, where the uprising battle is taking place, and some passengers are struck by stray bullets. They take temporary refuge in an empty building, and there she has a chance meeting with her ex-fiancé. He offers to put her up--that is, hide her--for a few days. He's now married, a professional who lives in an idyllic suburb reached by a trolley that runs through the woods. His wife seems more committed to putting up the fugitive than he is. The story involves the neighbors, the building owner who avoids involvement and seeks solace in classic poetry, and the super and his suspicious wife.