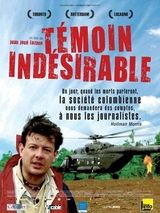 This documentary offers a complex portrait of Hollman Morris, the Colombian war journalist whose multiple award-winning news show Contravía is one of the few local current-affairs programs that refuses to pander to President Alvaro Uribe's staunchly authoritative government. While most television viewers in Columbia opt for variety shows and soap operas, citizens in search of suppressed truths tune in to Contravía to hear the latest news about forced disappearances, secret mass graves, and various other atrocities taking place all across the countryside. But when you live and work in the country that Reporters Without Borders claims is one of the most dangerous places in Latin America for a journalist to work, denouncing human rights abuses can be a dangerous game. Yet despite the danger to both himself and his family, Morris remains convinced that the situation in Columbia will never been improved if outspoken media figures like himself simply disappear into exile.