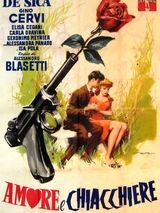 Maria and Paul love them, but they are very young and, moreover, Maria is the daughter of the municipal sweeper while Paul is the lawyer Bonelli, vice mayor and head of the opposition. To complicate the story there is the reconstruction of a hermitage destroyed during the war. Reconstruction would take the view of the Paseroni villa, big industrial and political traffic. Bonelli's lawyer, a great speaker, becomes a mayor for the death of his predecessor and is bought by Paseroni, while rejecting the love of Paul and Mary for social differences and why Paul should stay behind Doddy Paseroni. At this point, Paul and Mary flee to kill, just as Bonelli has to hold a talk on the radio for the inauguration of Paseroni's villa ...