This film deals with the aftermath of the Algerian war of liberation. Georges Montero, an Algerian-born Frenchman, manages an olive canning factory in Oran. He travels to Paris for a cataract operation. Marinette, his sister, and Belka, his friend and a recent immigrant, want him to return to France permanently. Friction develops between the two friends as Georges is pressured to sell his factory. Friendship developed between Georges and his surgeon, who as a French Arab has severed ties with his culture and country of origin. 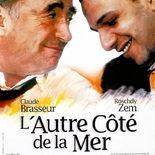