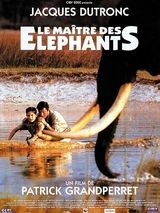 This French family-oriented adventure is set in the Cameroons and Zimbabwe and follows the exploits of a 12-year-old French boy who, following the death of his mother, is sent to Africa to live with his father, the overseer of a large game preserve. The boy, Martin, has not seen his father since he was two. Martin's arrival doesn't make much impact upon his father, Garoubier, who is too busy with his work to pay attention or show affection to the grieving lad. He is sent to school where he is the only white, but soon makes friends with a native boy, Fofana, whose stepfather leads his village and is called the elephant master. One day, Fofana suddenly disappears and during the search, Martin and his dad finally begin to get a little closer. Later Fofana and Martin team up and set out on their own to locate a missing herd of elephants. Trouble follows and adventure ensues.