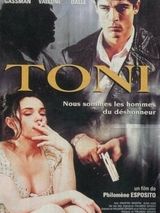 Toni is a mob movie combined with an urban love story and reflections about one's roots. The protagonist, Toni, is a young man from a small village in the south of Italy who arrives at the station Gare de Lyon in Paris. He never questions the education he receives from his mob family or the rules to which he is always chained. He contacts a man called "The Old Man," a strange character discarded by the family who is of help from time to time. This man is supposed to communicate to Toni all necessary information for him to accomplish his mission. Toni plans to execute it in perfect calm. But things do not go according to plan. He meets Marie, a vulnerable journalist whose best friend has just committed suicide. Two doomed characters enter a mysterious relationship.