French actor Mathieu Amalric directs the made-for-TV comedy La Chose Publique (Public Affairs). Shot on digital video, the film is a satire of French politics and media personalities. Television director Philippe Roberts (Jean-Quentin Chatelain) has been assigned to make a film series, so he decides to use his own life and marriage as an inspiration. Public Affairs was shown at the 2003 Cannes Film Festival. 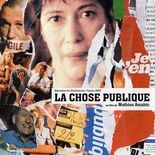